5+ Ways to Get Rid of Fungus Gnats in Houseplants

How to Identify Fungus Gnats

The first clue that you have Fungus Gnats in your houseplants is by a typical spray of little black flies that jump up when you water your houseplants.  Fungus Gnats are particularly attracted to pots with leafy plants and flowering plants.  Some of their faves are African Violets, Geraniums, and Poinsettias.Plant clues that you may have Fungus Gnats are yellowed, wilting, and dropping leaves near the base of the plant and plant growth has slowed down significantly over time.  This happens when the infestation is well advanced and root damage has occurred from a high population of larvae that has affected the plant’s vigor and vitality.

Where Do Fungus Gnats Develop?

Fungus gnats develop, grow, and hang out on the very top layers of soil.  Fungus gnats feed on fungus and other decaying organic matter that occur in moist soils.  Soils that contain peat moss are particularly attractive to fungus gnats, and most potting soils do have a peat moss component because peat moss makes a great base for potting soil.

Peat moss itself is decaying organic matter and fungus gnats and their larvae are a natural part of the decomposition process of peat moss.  The larvae pupate into flying gnats.  You don’t normally notice that the gnats are present until you water – the water flow disturbs them, so they fly up to get out of the way.

Fungus Gnats do live outdoors, too, but we usually don’t notice them and other insects feed on them.  When the cool days of fall approach, fungus gnats seek warmer territory and can migrate into homes. Once indoors, there are no predators to consume them.

Fungus Gnats are harmless to humans – they don’t bite, sting, attack buildings or other structures.   For the most part, their effect is innocuous and asymptomatic to plants.

Identifying the Life Stages of a Fungus Gnat

The Life Cycle of a Fungus Gnat

Fungus gnats develop from egg to adult in about 14-21 days.  Here’s how the cycle is split up: please use the darkwinged fungus gnat 3 stages photo for this one here

How to Control Fungus Gnats

Fungus Gnats can be a little tricky to get rid of once you have them, consistency is the key to batting down their populations.  Finding a way to prevent them in the first place is always better and we’ll look at ways to do that too.

Check out the following options for controlling fungus gnats & pick the one that is best for you:

This is a great first step in preventing a Fungus Gnat population altogether.  Because their eggs and larvae naturally occur in peat moss, which is most often a base for potting soils, the sterilization process should kill both the larvae and the eggs even before you plant anything.

2. Inspect house plants for Fungus Gnats before you take them home:

Before you take any plant home with you — whether that’s purchasing them from a store, greenhouse, garden center, or accepting them from a friend — take a good look at the plant’s stem and the top of the soil for adult gnats or larvae.  Rub the soil a little with your finger and tap the stem where it meets the soil.

If you ever give your houseplants a vacation outdoors for the summer, check them well before you bring them back indoors.

Moisture is a Fungus Gnat’s best friend, wet soil is their happy place and they will live where the water is because that is where the food is.  Fungi loves a good drink, so diminishing soil moisture will interfere with the gnat’s life cycle.

Here are some ways to decrease soil moisture:

4. Re-pot a Plant that has Fungus Gnats

You can give the whole plant a redo by completely changing out the soil.  Here’s how:

Yellow sticky traps are a great chemical free option. They attract and catch the adult flies so they can’t lay any eggs.

7. Use Thin Slices of Potato to Attract Fungus Gnat Larvae

The University of Manitoba suggests placing thin slices or strips of potato on top of soil to attract larvae.

8. The Use of Insecticides for Controlling Fungus Gnat

Insecticidal drenches or systemics are a final approach when all avenues have been exhausted.  Follow package directions carefully.

Remember to keep a watchful eye on your indoor plants regularly, changes happen quietly and insidiously.  Fungus Gnat infections can be controlled with consistent, persistent effort.

Feel free to contact me with any questions you have or any ideas that you would like to add to this discussion – your feedback is always appreciated & valued. 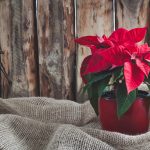 How to Care for Your Poinsettia in 3 Simple Steps

Poinsettias are the quintessential Christmas flower as they ring in the holidays like none other. They also have a tendency to really mess with people 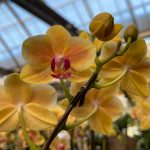 Tropical Plant Care in the Winter